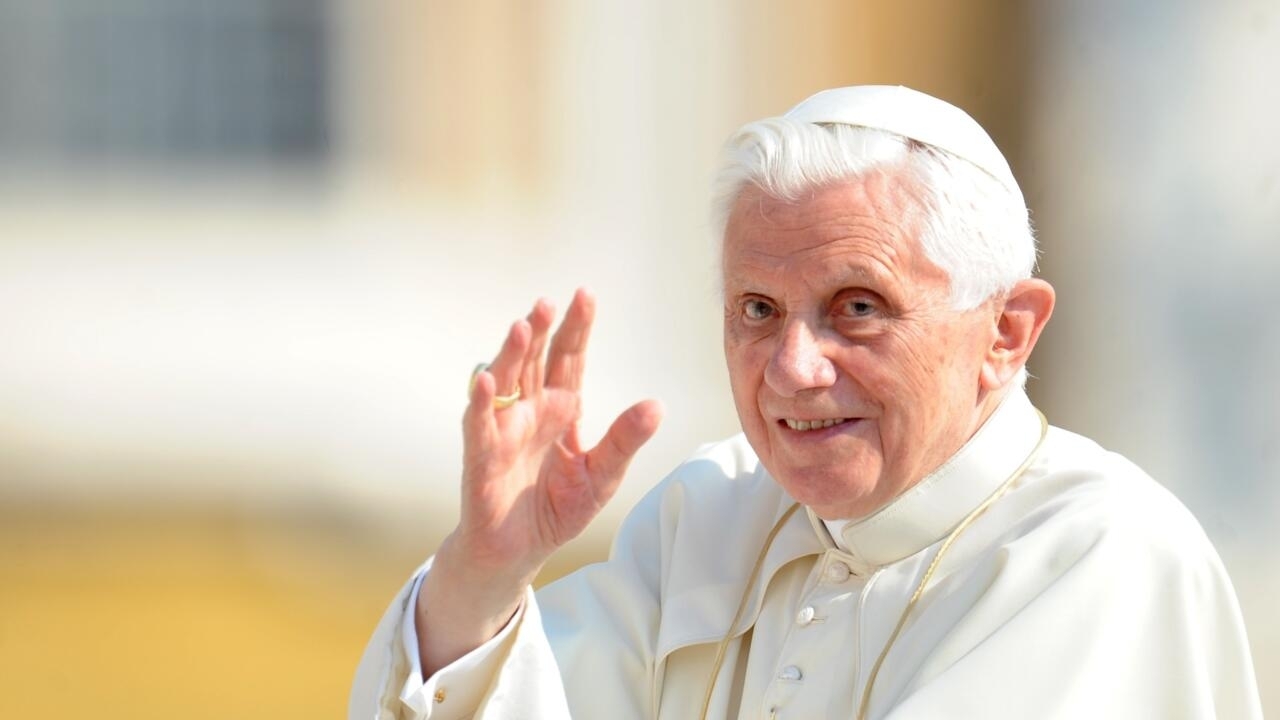 The opening words of the liturgy of the Word – ‘truly, God is my salvation’ (Is 12.2) – encapsulate one of the central themes of the ministry, teaching, and writings of emeritus Pope Benedict XVI.

We gather this evening to pray for the repose of his soul, to give thanks for his life and ministry in the service of the Church as priest, theologian, bishop, cardinal and as Pope.

I welcome and greet:

I greet all of you, clergy, religious, parishioners from the diocese, visitors who are present among us and all who join with us online.

Pope Benedict’s, Joseph Ratzinger’s life is a matter of public record. Born at 04.15 on the morning of Holy Saturday, 16 April 1927, in the small town, Marktl am Inn, less than ten miles from the famous Marian shrine at Altötting in Bavaria, he was baptised that same day with the newly blessed Easter water. Ordained a priest twenty-four years later on 29 June 1951, he served for a year as a curate in München-Bogenhausen. Thereafter, until March 1977, when he was appointed Archbishop of Munich and Freising, his life ministry was devoted to research and teaching theology in Freising (1954-1959), in the universities of Bonn (1959-1963), Münster (1963-1966), Tübingen (1966-1969) and Regensburg (1969-1977). After four years as Archbishop of Munich and Freising, on 25 November 1981 he was appointed Prefect of the Congregation for the Doctrine of the Faith which post he held until elected Pope 19 April 2005.

As we consign his soul to God, we may recall a few central elements of his work and thought:

The first that comes to mind relates to the preparatory stage of the Second Vatican Council. At that time Josef Ratzinger was Professor of Theology in the university in Bonn, where he entitled his Inaugural Lecture : The God of Faith and the God of the Philosophers’. At that time at the request of his then local bishop Cardinal Frings he drafted a lecture on ‘The Council and Contemporary Thought” which set out the framework for the Council. Cardinal Joseph Frings delivered the lecture in November 1961 as one of a series of six in Genoa. Pope John XXIII, who had called the Council, heard of the lecture, read it and congratulated the Cardinal expressing his gratitude for the lecture and indicated that it had crystallised his vision for the Council in words which he, Pope John XXIII, had not succeeded in finding : “ you have said what I wanted to say, but what I did not succeed in finding the words to say”.  Still not thirty-five, the young theologian was appointed as his expert advisor (peritus) for the Council proceedings by Cardinal Frings. In that role Joseph Ratzinger played a key role in the work of the Council with many other theologians and advisors.

A second element of his life’s work was already anticipated in the title of his inaugural lecture 1959 in Bonn  – The God of Faith and the God of the Philosophers.  Throughout his long life and the phases of his ministry as academic, bishop and Pope, Benedict XVI was fascinated by and explored the relationship between faith and human reason, between faith and the rational scientific mind.

In his 2010 address to Politicians, Academics and Leaders of Business in Westminster Hall, he observed : “… I would suggest that the world of reason and the world of faith – the world of secular rationality and the world of religious belief – need one another and should not be afraid to enter into a profound and ongoing dialogue for the good of or civilisation” . His published conversations with Jürgen Habermas, a highly respected secular philosopher and advocate of Communicative Action, led Habermas to affirm the place of religious and faith-based language in public discourse concerning core matters affecting the good of the human person and society [viz. Jürgen Habermas & Joseph Ratzinger, The Dialectics of Secularisation, On Reason and Religion, Ignatius Press].

In this same vein, as theologian and successor of Peter, Benedict XVI was preoccupied with the relationship between the Christian tradition, faith in Jesus Christ and culture, specifically modern culture.  Indeed, this was the subject he raised with an Irish bishop on one occasion : how are you engaging with contemporary culture, he enquired.   It’s a core question for all of us : how do we present, explain the life of Christian faith for  contemporary human sensibility – how do we hand on an appreciation of the Christian faith and heritage to  our youth?.  In his life’s work Pope Benedict explored Scripture and the great Christian tradition of thought, devotion, art, music and literature in order to present the Christian faith as “something living, something modern, which thoroughly shapes and forms all of my modern sensibility – and actually embraces it” – words Pope Benedict used in one of his famous interviews with Peter Seewald [eg. God and the World ; Benedict XVI, A Life, 2 vols ; Light of the World – Ignatius Press].

From our local perspective, his address at the Wednesday audience on 11th June 2008 on St Columbanus is an example of his persuasive clarity in unveiling the perennial freshness and pertinence of the heritage and culture of Christian faith. Of Columbanus, he concluded: “With his spiritual energy, with his faith, with his love for God and neighbour, he truly became one of the Fathers of Europe. He shows us even today the roots from which our Europe can be reborn.”

A person of refined sensibility, a gracious neighbour, one loved by the shopkeepers of the streets around the Vatican where he did his shopping before becoming Pope, his voluminous writings, Encyclicals and Addresses proclaim the power and boundless love of God for humanity.

A citation from the homily he preached at the Mass he celebrated to initiate the Conclave at which he was elected Pope catches something of one who was a man of God for all Christians and people of good will : “ Each one of us wants to leave a trace that will last.  But what remains?  Not money. Neither do buildings survive. Nor do books.  After a certain period of time, of greater of shorter length, all these things disappear. The only thing that remains forever is the human soul, the human being created for eternity by God.  What remains, the fruit that remains therefore is what we have sown in human souls – the love, the knowledge, the gesture capable of touching the human heart ; the word, that opens the soul to the joy of the Lord”.

As we remember in prayer this evening Joseph Ratzinger, emeritus Pope Benedict XVI, we pray that as he proclaimed the “good tidings” of the incarnation for each person, for human history and for the foundations of human society, we for our part may discover and realise with  the author of the second reading in the Liturgy of the Word that “as long as we love one another, God will live in us and His love will be complete in us” (1 Jn 4.12).

*To be checked against delivery.